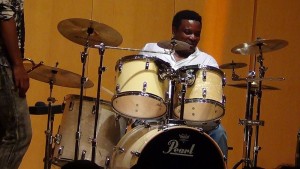 Patrick Charles is not your average drummer, if there is one.

The Haiti-born, New Jersey-raised, Los Angeles-residing drummer has worked with every major musician on the jazz music scene: from diva Anita Baker to jazz great Everette Harper, among others.

As Charles played with major players in the music scene, he recognized the need to do a project that was close to his heart, and lateral to his soul and roots. He put together Cité Soleil, a musical project inspired by his love for Haiti and his early years there.

Charles is eclectic to say the least. Says guitarist and composer Gaku Murata, who performs with Charles: “He doesn’t discriminate music by genre or who plays.” It turns out that everything from Korean pop music to 80’s disco music is pleasing to the drummer’s eardrum. “I could not believe that he wanted to play a Korean Pop song—Chinese version—along with his original jazz fusion songs for his next gig,” continues Murata. “What distinguishes him from other musicians is his honest passion for creating good music. He only cares about creating good music. He doesn’t care about how he creates or who he creates with.”

Murata, who frequently works with Charles says he’s noted the musician’s penchant to be inspirational even in a work relationship. “When I work with him for his gigs,” observes Murata, “he always encourages me to be creative, spontaneous, to feel free to push myself. I remember that he told me that making a mistake is okay because sometime you have to take a risk in order to push yourself to the next level.”

Now, it is time to talk to the man himself!

So you started playing gigs in high school. What did your parents think about that?
Actually, my mother was cool with it, but my father was not, ’cause you know, all Haitian parents want their kids to be doctors, so when I told my dad that I wanted to be a drummer, he was furious, ’til this day he’s not exactly thrilled about it. So through out high school, I’ve played in many different bands—playing all kinds of music in the New Jersey and NYC Area.

Recreational drugs and substances are said to be quite popular in the music business. What is your point of view on them?
Well, that was one of my parents concerned. Yes, drugs are a big part of the music business, but not every musician uses drugs. I’ve been around plenty of cats that use drugs, but I’ve also worked with even more that don’t use drugs. Drugs were never a thing for me. I’m just not interested in drugs. It’s that simple. I don’t even smoke!

Is inspiration hard to find when it comes to your music?
No, it’s not. Inspiration for my music comes from my everyday observing of life. Life is my inspiration.

Between Charlie Bird, Thelonious Monk, Branford Marsalis, Miles Davis—which great has had the most influence on your work?
Well, who doesn’t love Bird and Monk and Branford? They are legends and pioneers, but I’m a huge student of Mr. Miles Davis. I love Miles; all I do is constantly study his music, and his concepts and his approach. Miles has the most influence over my music.

And your impression of this…?
Cool.

Being a musician has its ups and downs. What has been the highlight of your life as a musician?
The highlight so far has been graduating from Berklee College of Music and recording my own music and having some of my favorite artists play on my recordings and performing at the prestigious Yokohama Jazz festival with my group. And to be blessed to still be playing and studying and learning after 22 years.

Now, tell us all there is to know about your Cité Soleil musical project.
Okay. When I was attending Berklee, I began to mess around with composing, so by the time I finished school, I had a few tunes laying around, so I decided to do a record, and “Cité Soleil” was the only tune on the record that had a name before it was even written—that’s because of what I saw happening in Haiti at that time with [Jean-Bertrand] Aristide and the violence that was centered in Cité Soleil.

And as a kid, I remember going shopping in Cité Soleil with my mom. It was a beautiful little city by the sea, and to see how it has deteriorated with political violence and misery was hurtful, so I wanted to write something to dedicate to Cité Soleil and Haiti. And one day, I sat at the piano and the universe gave me Cité Soleil. “Cité Soleil” was the last tune to be written for the record.

When I began to record in 2006, I wanted to have some of the baddest artists that I knew from L.A. to record with me—artists like Grammy-nominated pianist and composer Kevin Toney and saxophone great Everette Harp and trumpeter and composer Johnny Britt and keyboardist Wayne Linsey—who by the way have played with Miles. The record took me a year to record, mix and master. The mix was done by my good friend Conley Abrams. Conley has worked for Dr. Dre at Death Row records, and the mastering was done at Columbia Mastering Studio by mastering legend Ron McMaster who also worked with Miles. Cite Soleil was released on my own label the summer of 2007.

You were born in Haiti, you grew up in Jersey, and you now live in Los Angeles. How has each of these residences affected you as a person, and more importantly your art?
Well, being born in Haiti shaped who I am as a man. I have a high and strong moral standing in life, because I know what it truly feels like to have absolutely nothing and to come from nothing. So as I grew up in Jersey, I took absolutely nothing for granted. I made the best out of any opportunity that came my way, ’cause I know I was just lucky to be able to grow up in the States. And as for my music, part of Haiti is always going to be in my work.

I’m Haitian; it’s in my DNA, but growing up in Jersey I was exposed to a new world of music. I was quickly exposed to all style of music through MTV—this was way back when MTV just started and they actually played music videos. And when I started to play drums. I used to go to all the jam sessions in the neighborhood clubs, and even went to jam sessions in NYC. I think all those things affected my music; I don’t think L.A. influenced my music at all.

What are your plans, post-Cité Soleil disc release?
I wrote some new music already that I’m very excited about, and also this time around, I will be doing more writing collaborations with different artist friends of mine. I plan to start recording next year, and hopefully have a release that same year, ’cause it’s about time.

There are no upcoming events.